How to Make Back-to-School Math Fun

Make back-to-school math fun! On the first day, engage students with a graphing icebreaker. First, challenge them to make a human graph – without talking. Then create a collaborative pictograph. Finally, have each student construct their own bar graph. Kids love the fast-paced, active nature of this first day activity.

Let’s visit our favorite fourth-grade teacher, Ms. Sneed, on her first day of school. As her shiny new students straggled in, the teacher noticed that they weren’t too talkative. Ah yes, the first day jitters. Well, she had something planned to take care of that.

After everyone had found their seats, Ms. Sneed addressed the class. “Good morning, everyone. I’m sure you all know that I’m Ms. Sneed.” All eyes stared at her, trying to figure out if this would be a good year – or not.

“Many teachers use this time to organize materials and go over rules. But I’m different.” A few kids squirmed in their seats.

“We’ll start with a math icebreaker instead.” Some students looked distinctly uncomfortable.

“As a group, we’ll make a human birthday graph. Let’s go outside.” The kids looked around. What was she talking about? “Yes, I mean it. Make a line by the door,” said their new teacher.

Ms. Sneed stopped in front of a long brick wall. “Please line up by the month of your birth. For example, January birthdays will line up on the left. February will be next to them. When we’re finished, a airplane flying overhead would see our human graph. There’s only one catch: no talking!”

At first, the kids didn’t know what to do. Then some kids started motioning. At some point, one of them realized that holding up fingers works. (You know, six fingers for June…) With a little guidance, they formed their graph.

Ms. Sneed had set up a graph on one wall of the classroom.

As they returned to the classroom, she handed each student a cupcake shape. “Place your cupcake above the month of your birth,” she directed. In no time, the class had also constructed a pictograph.

“Wow, we’re already forming a community of learners,” thought Ms. Sneed. A small smiles played along the corners of her lips.

She walked to the front of the room. “What do all graphs have in common?”

Her students thought about it. One said labels; another, data; and yet another, titles. Then a small voice piped up, “What about those lines? You know, the one that goes up and the other that goes to the side.”

“Ah,” said Ms. Sneed. “You mean the x- and y-axes.” She launched into a lively explanation, using her arms to illustrate.

In a short amount of time, they had reviewed:

“Now,” said Ms. Sneed, “you’ll create your own bar graph using the data from our pictograph.” She went over the directions, and all the kids opened their new crayons and colored pencils. Soon, the room was filled with a busy type of quiet. “Here we go,” thought Ms. Sneed. They were off to a great beginning.

As the students finished their bar graphs, Ms. Sneed checked them. Then she hung them on the wall. “Now they know this is their classroom,” she thought. 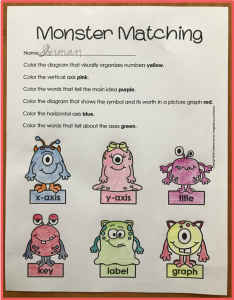 Sure, lots of teachers spend the first days or weeks establishing order. But Ms. Sneed likes to hit the road running. After all, in the first hour or two of school, kids learn what’s important to the teacher. Now, Ms. Sneed’s students know that she values learning and their community of learners. Can one set of back-to-school math activities do all that? You bet.

The teacher’s eyes twinkled as she thought about her next activities. Instead of a beginning of year math test, she would use whole number task cards for fun baseline assessment. That would give her some great starting points. From there, kids would play Math Facts Baseball and delve into multi-digit whole numbers.