How to Manage Difficult Students in Your Classroom

Difficult students can ruin a school year. When you encounter challenging kids in your classroom, take these steps. First, use proactive strategies to fend off bad behavior. Second, establish reactive consequences to curb it. Third, forge strong partnerships. You may also need to develop an individual plan. Remember to remain consistent. And never let your emotions get the best of you. You can do it! 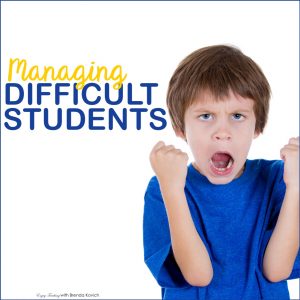 She knew about them before school began. Who? The Big Three. Yep, Ms. Sneed had been informed that she would have three difficult students. It was going to be a challenging year. To gear up, our favorite fourth grade teacher learned a little about each one:

Use Proactive and Reactive Strategies for Your Difficult Students

Before school began for the year, Ms. Sneed talked to each child’s previous teacher. However, she knew that each teacher was different. What worked for them may not work for her. Therefore, she would try their strategies and also try her own.

Ms. Sneed’s strategies always supported one goal: Keep everyone safe, comfortable, and learning. Since that goal included the Big Three, her plans included ways to keep them in the classroom – and out of the hall or office.

Are you “pinspired”? Feel free to pin images from this post.

For Ms. Sneed’s first line of defense, she used proactive strategies. In other words, she tried to prevent – or at least minimize – problems.

When kids acted up, Ms. Sneed always reminded herself, “Keep calm and carry on.” It was really, really hard not to yell. However, having a plan helped. This was her second line of defense. 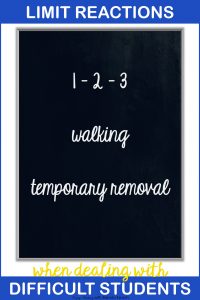 Now Ms. Sneed had been around the block a few times. Therefore, she realized that she needed help. And lots of it.

Over the years, Ms. Sneed had come to realize that asking for help showed strength, not weakness. When managing difficult students, a teacher must reach out. Through partnerships, the child can be better served. Furthermore, stress on other students – and the teacher – is reduced.

Whenever Ms. Sneed felt that a difficult student needed more help, she recorded daily behaviors. Early in her career, she wrote in a journal. But later on, she developed a simple checklist to track behavior.

During this particular year, Ms. Sneed realized that Jerome would require additional services. After all, she couldn’t ignore – or leave – her students while she helped him defuse. Therefore, she created a special behavior tracker just for him.

Develop a Strong – but Simple – Plan

In addition to all of the strategies mentioned above, Jerome required a special plan. Instead of addressing all of his issues, Ms. Sneed focused only on those that prohibited learning (Jerome’s or other students’).  Shouting, refusing, pushing, and running away were targeted. Because he dreaded any parent-teacher contact, this became the natural consequence.

If Jerome exhibited any of the targeted behaviors, he received a warning. Once three had been exhibited in a given range of time, the teacher called home. At first, Jerome melted down whenever his parents were called. Before long, though, the targeted behaviors subsided. Jerome began to self-regulate. And, surprisingly, even when Ms. Sneed called home, Jerome was able to handle it calmly.

Remain Consistent, Keep Emotions at Bay, and Never Give Up

So, you may ask, was Ms. Sneed able to keep her cool all the time? Absolutely not! Sometimes her blood boiled and she snapped. It happened. But then she’d take a deep breath and carry on.

Dealing with difficult students is emotional work. Heck, teaching is emotional work! Most afternoons, Ms. Sneed felt exhausted. However, the next day, during her morning reflection, she gathered herself up and reminded herself of this. “Consistency maintains order,” Ms. Sneed chanted. And, you know, it helped.

Do you have a difficult student (or two) in your classroom? It’s tough, but you can prevail.