Our favorite fourth grade teacher, Ms. Sneed, was ready to launch the next phase of her geology unit. On Monday morning, she set out the materials for the first lab. Then she waited for her students to file in.

What Is Mechanical Weathering?

“Good morning, everyone! This week we’ll learn about slow changes to our planet’s surface. First, we’ll explore weathering, which breaks down rocks.”

Ms. Sneed paused and looked out at her class. “How many of you have visited the beach?” Many kids raised their hands. “Okay, imagine the rocks at the edge of the water. As the waves hit them, they roll around and knock together.”

She picked up a jar. “This jar holds a piece of chalk – which represents a softer rock – and a few actual rocks. You’ll take these steps to conduct the lab:

Ms. Sneed assigned roles and pointed out the materials. With no further ado, her students moved into their science groups and got busy. As they shook the jar, some groups’ chalk broke. Additionally, it became smaller and rounder.

“Just one more thing,” Ms. Sneed said as she distributed a cracker to each group. “Sometimes water seeps into cracks in rocks. Other times, plant roots grow into them. As the water freezes or roots grow, pressure builds inside the rock. To simulate this, I’d like you to stick a pencil into your cracker. Go ahead and apply some pressure.”

Afterward, the class discussed mechanical weathering and defined it:

Mechanical weathering happens when outside forces act on a rock.

What Is Chemical Weathering?

The following day, Ms. Sneed introduced her class to chemical weathering. Instead of working in groups, she set up two demonstrations.

“I’ve poured vinegar, which is a weak acid, into this jar,” she told her students. They watched as she dropped a piece of chalk into the jar. “This chalk is similar to limestone. Let’s see what happens to it.”

The class watched as small bubbles formed. “These bubbles show that a gas is escaping,” their teacher said. “In chemical changes, types of matter combine to make something new. Additionally, in many cases, something is expelled, like this gas.”

“As we discussed before, weathering is a slow change. Therefore, we’ll let this set until tomorrow’s class.”

After Ms. Sneed set the jar on the side table, she picked up another jar. As the class watched, she poured a little vinegar into its lid. Then she placed a small bundle of steel wool on top of it. Finally, leaving it upside-down, she screwed the jar onto the lid.

“Let’s let this one set overnight too,” she said.

The next day, the students ran to the jars to see what happened. The chalk, they thought, looked a bit smaller. And the steel wool was beginning to rust.

The Difference Between Mechanical and Chemical Weathering

“Let’s do one more experiment,” Ms. Sneed said. She poured some salt into a cup of water and stirred. At first, the water was cloudy, and some salt could be seen at the bottom of the cup. However, as time went on, the water cleared, and no salt crystals could be detected.

Some groups thought the change was physical; others felt it was chemical. In the end, Ms. Sneed explained and illustrated how substances can dissolve to form a solution. “Therefore, this experiment is an example of mechanical weathering. The salt remains salt, and the water remains water.”

Some kids looked skeptical. “Hmm,” said Ms. Sneed, “let’s pour this salt water into a shallow container and see what’s left over after the water evaporates.”

How Does Slope Affect Erosion?

The following day, as the class filed in, they stopped by the side table to look at the materials their teacher had set out. “Today, two lab groups will help me with a demonstration,” Ms. Sneed said. “Our lab will focus on the next slow change: erosion. This happens when rocks move.”

After their teacher gave the directions, the two groups conducted the demonstration.

It looked as though more sand had eroded from the tray with the book under it. “To be scientific,” said Ms. Sneed, “we’ll drain off the excess water and let these set overnight. After the remainder of the water evaporates, we’ll measure how much sand has eroded.”

The following day, the two groups measured the sand and wrote their results on the board. Yep. Greater slope caused greater erosion.

How Does Groundcover Affect Erosion?

After her students completed their lab sheets from the day before, Ms. Sneed asked two more groups to help with a new demonstration. “Today,” she said, “we’ll compare erosion on two different landscapes: with and without groundcover.”

Similar to the day before, each group added 500 cc of sand to their erosion table. However, one group covered their sand with a sheet of AstroTurf. Again, they poured 500 ml of water onto the tables. The next day, they measured, recorded, and drew conclusions. 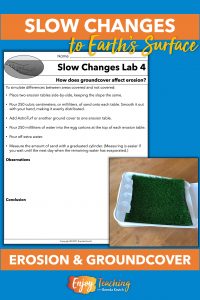 How Does Water Volume Affect Erosion?

“One more erosion lab,” Ms. Sneed announced the next day. This time, they experimented with a different variable: the volume of water over time. To achieve this, one group made the holes in the egg cartons at the top of their erosion table bigger. Then they completed the demonstration in the same manner as before. 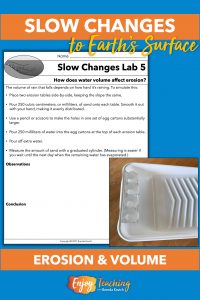 How Do Obstacles Affect Deposition?

On the final day of experimentation, the class explored deposition. “We’ve talked about weathering and erosion,” she said. “But today we’ll take a closer look at the ways eroded earth is deposited. In this lab, one group will place an obstacle at the bottom of the erosion table. Then we’ll all see how this affects the position of the eroded material.” 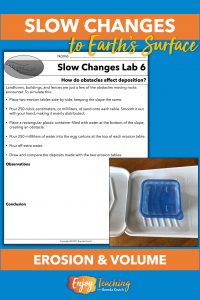 As the unit wound down, Ms. Sneed asked her students to apply what they had learned. “Let’s work in groups for these activities,” she told them. “After you look at a picture of a landscape, your group will discuss whether they see evidence of weathering, erosion, and/or deposition. Of course, I want you to provide evidence as well.” 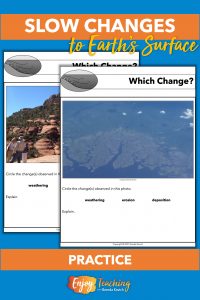 As her students discussed the photos, Ms. Sneed walked around and listened as her students debated whether the rocks had worn down, moved, or settled in a new place. Yep, they were getting it!

“On Thursday,” Ms. Sneed announced, “you’ll take a test over slow changes to Earth’s surface. I’ve posted a link to a set of slow change videos that you can watch for review. In addition, you’ll find a review sheet on the side table.”

“This unit was fun,” she heard one girl whisper to another. Once again, that famous teacher smile appeared on Ms. Sneed’s face. 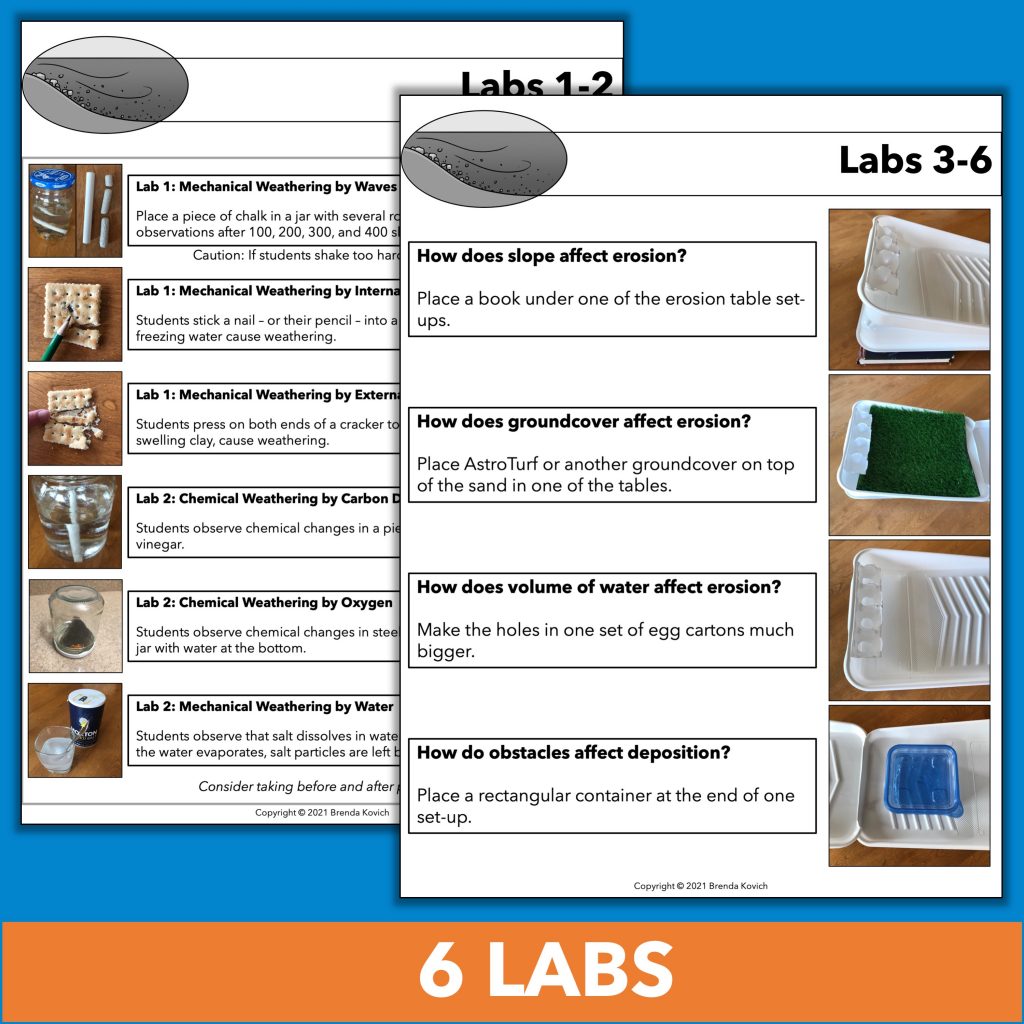