Types of poetry teach kids about the expressive side of writing. When you include a variety of genres, you can also hit different literature and language skills. My favorites include rhyming, limericks, diamante, haiku, cinquain, concrete, and acrostic poems. Read on to see how it works.

Before Teaching Types of Poetry

Our favorite fourth grade teacher, Ms. Sneed, stood in front of her classroom. Then she spread her arms out wide. Her students knew what that meant: the two sides of writing. “Today,” she said, “we’ll begin studying types of poetry.”

The room buzzed with excitement.

At that, her students started pointing to the right.

Next, Ms. Sneed walked across the room to her projector. Picking up a marker, she asked, “What do I mean by that?”

As her kids made suggestions, she wrote them down. Soon, they had an impressive list with definitions and examples:

“Regardless of the form of poem,” said Ms. Sneed, “figurative language plays a big role.”

Now she pulled out a review sheet and placed it on the projector. “Recently, we studied elements of poetry. Surely you remember. Let’s review.” Quickly she discussed the page: 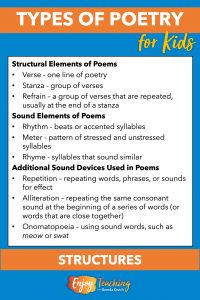 “Now,” said Ms. Sneed, “you need to understand something. In the past, we focused on poems with all or most of these elements. As we dig into a variety of types of poetry, you’ll notice that not all of these are included. During this unit, we’ll also refer to poetry by famous poets of the past.”

Over the next few weeks, Ms. Sneed introduced one type of poetry each day. First, kids explored structure and looked at some examples. Second, their teacher discussed one notable poet who had used that form. Third, kids wrote in that genre (which was their favorite part!)

Let’s look in on a few snippets of instruction.

“Today,” said Ms. Sneed, “we’ll work on rhyming poems. As we’ve discussed before, rhyming can occur in different patterns. For example, in couplets, sets of two consecutive verses rhyme.” She launched into a rendition of “Twinkle, Twinkle, Little Star” as an example.

How I wonder what you are

Up above the world so high

“What kind of rhyming pattern do we hear here?”

“Right. Alternatively, we could use an alternate rhyming pattern.” Again, she used a familiar children’s poem as an example:

Mary had a little lamb

Its fleece was white as snow

And everywhere that Mary went

The lamb was sure to go

“Now we hear an A-B-C-B pattern, and every other line rhymes. Of course, many different patterns are possible.” 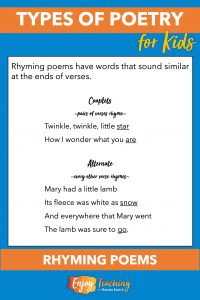 After instruction, Ms. Sneed announced their writing project. “For this type of poetry,” she said, “we’ll be writing I Spy poems.”

As she continued, the kids looked around at each other in surprise. “Actually, you’ll each bring in a bag of related items. Then you’ll arrange and photograph them. The poem will reflect the picture.”

With that, Ms. Sneed pulled out a few I Spy books. As she read aloud, her students clapped the rhythm. Afterward, they discussed the rhyme. And then, of course, they looked at the pictures to find the items listed.

A few days later, the room buzzed with excitement. I Spy Day! After they set up their items, Ms. Sneed photographed them. Then, after lunch, they wrote corresponding poetry. Afterward, she printed the pages and hung them in the hall for all to see.

Next, Ms. Sneed introduced limericks with a silly poem:

There is a fair lady named Brender,

Who goes wherever they send her;

Or even a hike;

No distance will ever offend her.

After that, Ms. Sneed let them explore more limericks from A Book of Nonsense by Edward Lear. [Note: Some of these poems are culturally insensitive. Please select some for your students instead of giving them the link.]

Finally, the teacher announced their writing project. “For this form of poetry,” she said, “you will write fairy tale limericks. Each of you will receive a template featuring a specific story. Then you will choose a character and write a poem.”

Once again, the young poets got right to work. And once again, Ms. Sneed hung their masterpieces for all to see. 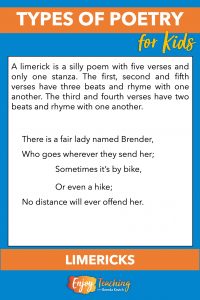 Over the next few days, Ms. Sneed spent time teaching denotation and connotation. To establish degrees of meaning, her students placed synonyms on continuums.

Finally, when she felt they understood shades of meaning, she introduced the next type of poetry. “Diamante, a diamond-shaped poem, was created in 1969. Actually, it was created just for kids.”

The teacher spelled out the format for each line:

Then she provided templates. Once again, the students got busy.

As Ms. Sneed circulated around the room, a small teacher smile spread across her face. Yep, diamante reinforced her students’ understanding of parts of speech and vocabulary nuances. 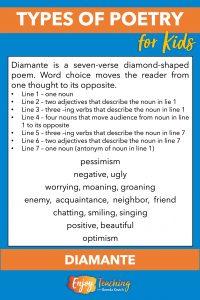 “Next up,” Ms. Sneed said the following day, “is haiku. This ancient format has only three lines. In the first line, you must use exactly five syllables. For the second line, you’ll include seven. Then, in the third line, it’s back to five syllables.”

The teacher took a deep breath. “While our first three types of poetry expressed fun, lively themes, this form is more serious. Please close your eyes for a moment. Then imagine a spring day. Actually, it’s early spring. Small plants push their way out of the ground. Up above, shriveled, brown leaves remain. How can we express this using haiku? Let me give an example:

She continued explaining how haiku evokes images and feelings – maybe even nostalgia – for a certain shared experience with nature.

Finally, her students tried their hands at writing haiku. Surprisingly, some of her silliest students penned the most moving poems.

The following day, Ms. Sneed continued with a related genre. “Now we’ll explore cinquain,” she said. “This five-verse poem has 22 syllables. Like haiku, it expresses a thought or feeling. And many times, you can read it as one sentence. Let me give you an example:

“Now we’ll discover the rhythm. Clap with me as we read the poem again. Then we’ll establish how many syllables each line has.”

In no time, the class figured it out how many syllables in each line:

“What types of figurative language do you see?” Ms. Sneed asked next.

Ms. Sneed smiled. “Great! Now I’ll expect each of you to use at least one form of figurative language in the cinquain you write today.”

As her unit on types of poetry wound down, Ms. Sneed switched back to lighter forms of poetry. First, her students tackled concrete poetry, also known as shape poems. While some students simply filled shapes with words, others used complete verses. And some even created shapes free-form. Yes, a few were born poets!

On the final day of poetry writing, Ms. Sneed introduced acrostic poems. “Actually,” she said, “you’ve probably seen these before. Maybe you wrote them in other grades. In this form, a word is spelled vertically.” Again, she presented a sample:

Bring out your bat,

And your ball and glove.

Slip on your hat;

Embrace what you love.

Bring out the ump,

And get ready for fun.

Let go of your slump.

“As in this poem, the vertical word traditionally occurs at the beginning of each line. However, we’ll try something different. Today, you’ll spell it down the middle. Fortunately, this is much easier. After you’ve decided upon your word – or words – write the verses. Then move them so the word appears in the middle. We’ll use our Chromebooks to make this even easier.”

That morning, Ms. Sneed again circulated as the kids worked. On the walls and in the halls, her students’ published poems hung. In the room, children pecked away at their keyboards, intently studying their screens. Yes. This was what it was all about. This was why she enjoyed teaching. 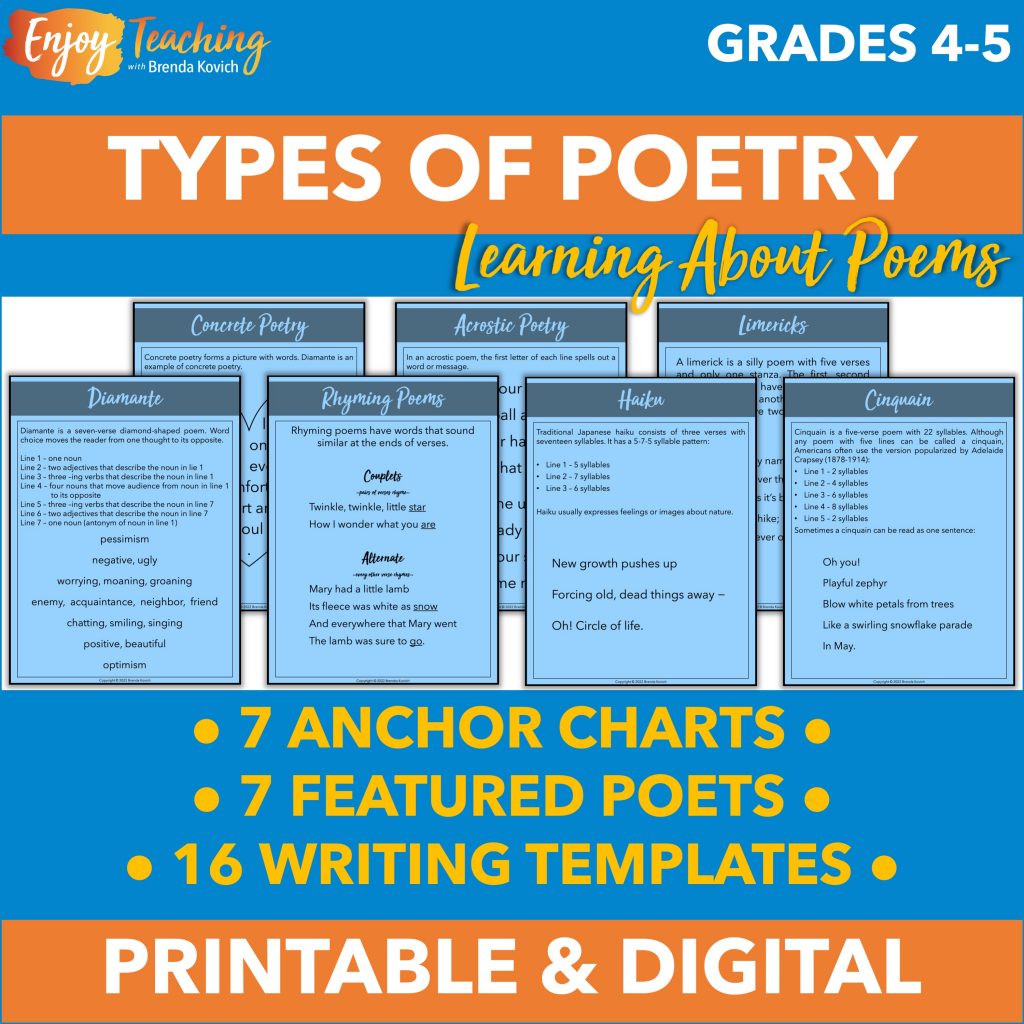 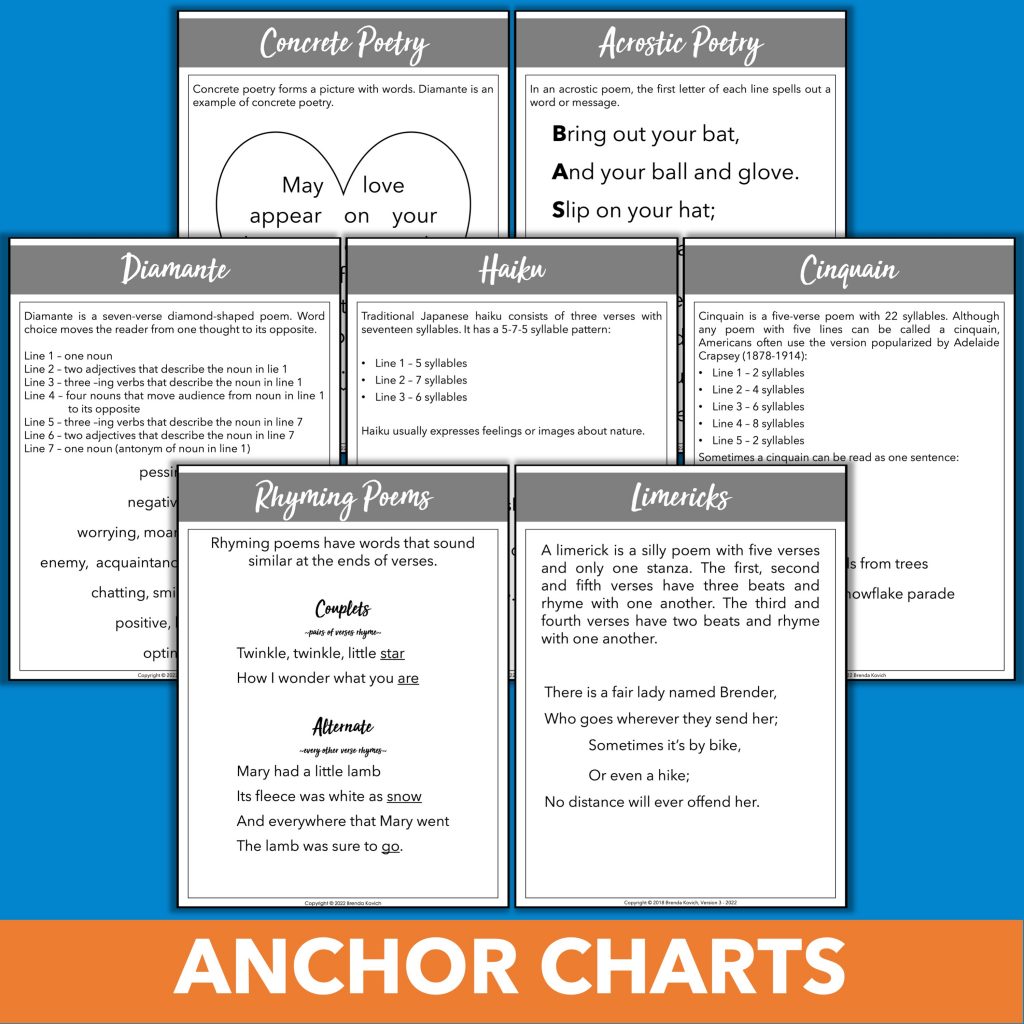 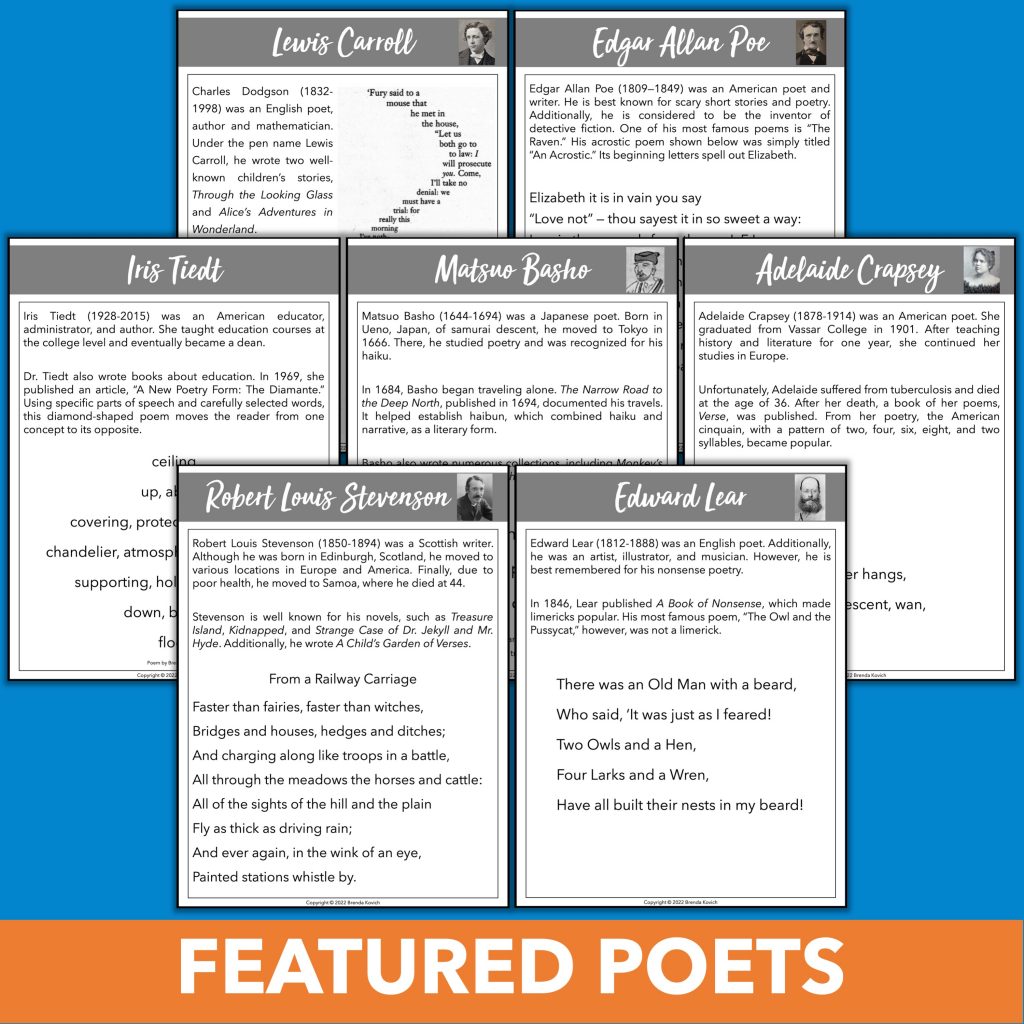